From the Plant to Pizza Pan 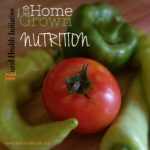 From the Plant to Pizza Pan

Following this past weekend’s hot and humid weather, she harvested a handful of garden goodies, including banana peppers, Rutgers heirloom tomatos, and green peppers. Shaya plans on using the vegetables for toppings of a homemade pizza tonight.

“Fresh ingredients provide for a more vibrant taste,” she said, “and it’s rewarding knowing the vegetables came from my garden.”

Shaya hasn’t always been a gardener, but it wasn’t due to a lack of interest. Prior to moving [back] to Wisconsin in 2013, she lived in St. Paul, Minnesota for more than a decade.

“When I first told Yogi [husband] I wanted a garden, he didn’t believe me,” she said. “He agreed he would build it but said the rest of the responsibility was mine.”

In the summer of 2015, Yogi built her a raised garden in the back corner of their yard in Neenah, WI.

Now it’s your turn. How do you use your garden goodies? Leave us a comment below.

What’s new at the RHI: